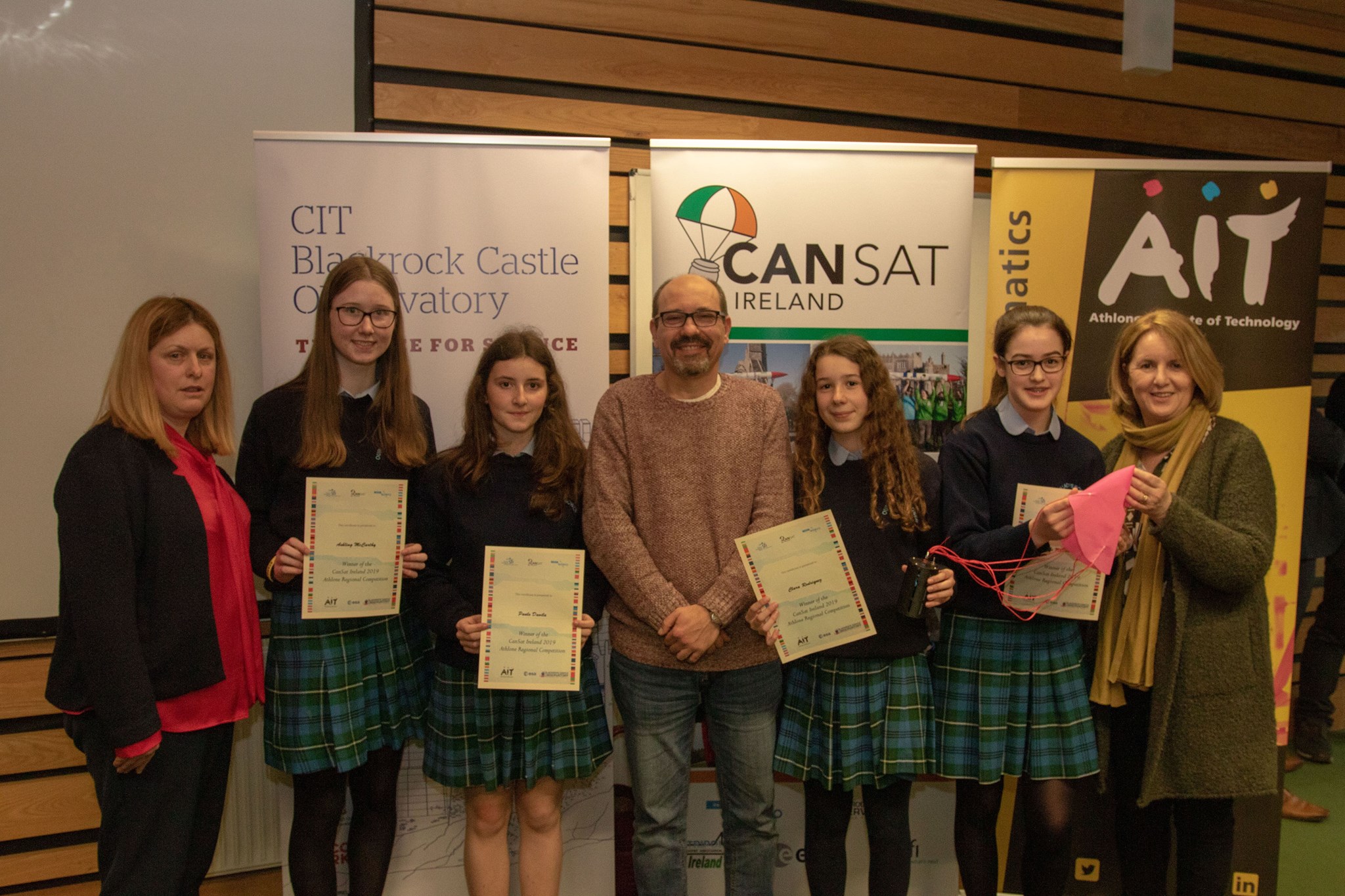 Transition year students from Our Lady’s Bower Secondary School took home the top prize at this year’s Midlands CanSat Regional competition in Athlone Institute of Technology earlier this week. Competing against five other secondary schools, the aspiring young engineers designed and built a miniature satellite using a soda can, incorporating all the major subsystems found in an actual satellite, such as power, sensors and a communications system, into its minimal design. Shortly after, the girls launched the device and carried out a scientific experiment before landing their miniature satellite and analysing the data it had collected.

Coordinated by the European Space Agency (ESA), the CanSat Ireland competition is designed to simulate all aspects of a real satellite mission, including design, development, testing, launch, operations, and data analysis, by means of teamwork, and foster an interest in STEM careers. Under the direction of Marcus Rahilly, Head of Department of Special Projects at Athlone Institute of Technology, with assistance from Paul Mulvey and Kevin McDermott, both electronic engineering lecturers, three workshops were organised to help participating schools build and program their CanSats. Over the course of the workshops, students were given a grounding in electronics, sensors, computer programming, radio telemetry, mechanical design and parachute design, as well as soft skills like problem solving and how to work effectively in a team.

A CanSat Ireland Regional Partner, Athlone Institute of Technology hosted five secondary schools at this year’s Midlands CanSat Regional competition: Moate Community School, St Brendan’s Community School Birr, Our Lady’s Bower Athlone, Castlerea Community School and Colaiste Chiarain, Athlone. Each of the schools made presentations to a judging panel consisting of representatives from Blackrock Castle Observatory, Athlone Institute of Technology and the European Space Education Resource Office, who, after an hour of deliberation, named Our Lady’s Bower, Secondary School the Midlands CanSat Regional winners for 2019. The all-girls team will go on to compete in the National CanSat finals in Portlaoise on May 2nd. Wishing the team well, Dr Enda Fallon, Head of Department of Computer and Software Engineering, said: “The depth of knowledge and enthusiasm the competitors display when explaining their mini satellites points to a bright future for ICT innovation in the Midlands.”

Last year’s winners, Marist College, Athlone, won the coveted national title and went on represent Ireland at the 2018 European CanSat Finals held at the Regional Fund for Science and Technology (FRCT) on the island of Santa Maria, Azores.