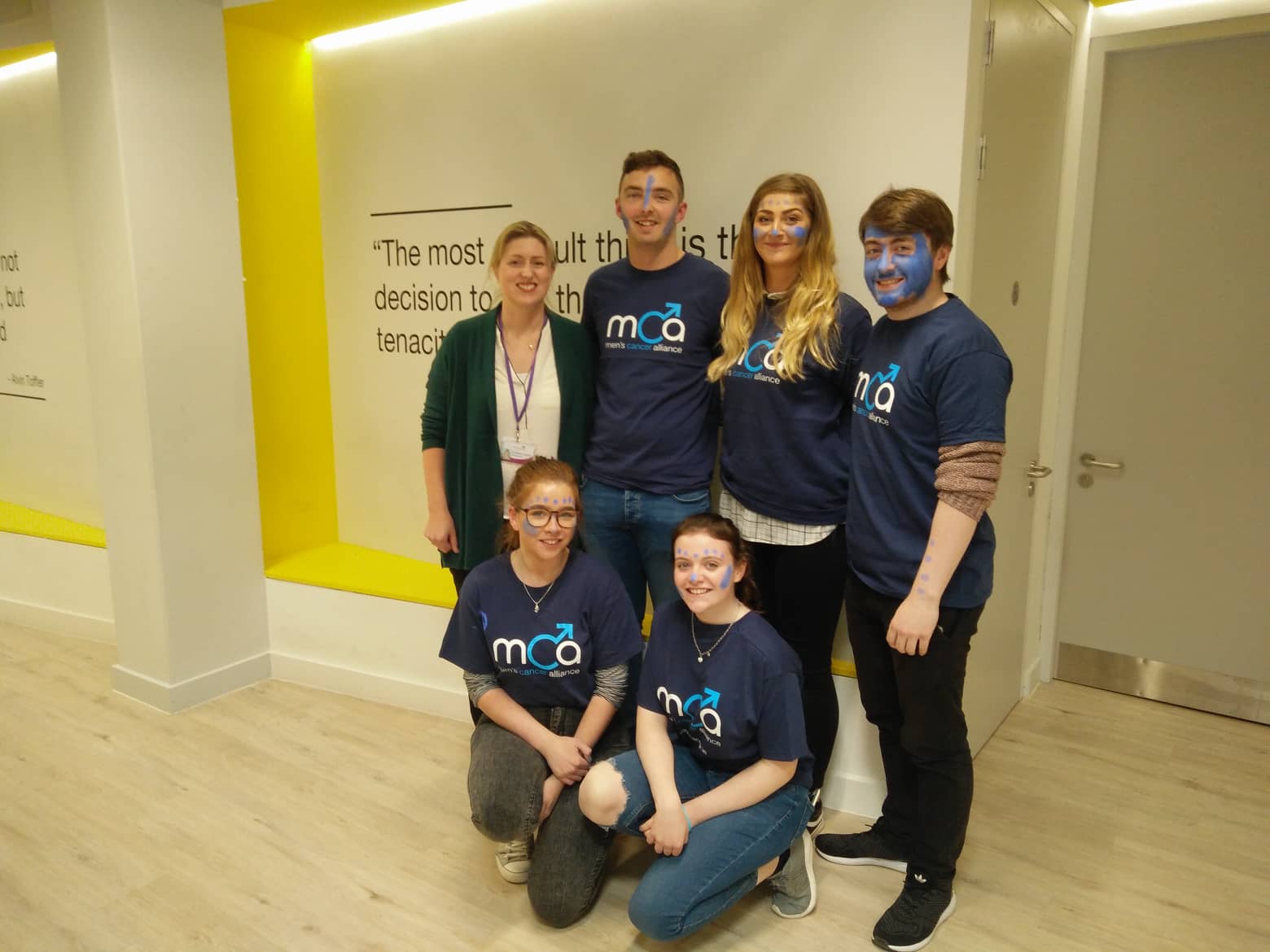 As part of Blue September, an international cancer awareness campaign dedicated to encouraging men to be more proactive in looking after their health, AIT SU held a fundraiser to raise funds for men’s cancer support initiatives. As part of the event, testicular cancer survivor and fourth year Social Care student Colm Walshe told his story to encourage other young men to take responsibility for their health and to be symptom aware.

In October 2017, Colm’s life turned upside down. He’d been suffering from a pernicious cough that was bringing up flecks of blood. Perturbed, Colm made an appointment with his local GP who, upon examining him, showed concern about the large swelling that had materialised on the side of his neck. His GP immediately made him a hospital appointment for an X-ray and blood test.

Not realising the gravity of the situation and without a clear diagnosis, Colm almost didn’t make the very hospital appointment that ended up saving his life. He recalls: “I wasn’t going to go to that appointment, I had college that day, but something stopped me. It was on the way and so I just made the decision to pop in for a few minutes.” Eight hours and a battery of tests later, Colm was still at the hospital. The doctors had an inkling that something was badly wrong and wanted to keep him in overnight for observation, but he refused.

Two days later, Colm was transferred to a hospital in Galway and within an hour of arriving was informed that he had testicular cancer and that it had metastasised to his lungs and glandula. “The actual diagnoses wasn’t as shocking as the look on my mother’s face,” he quipped. Colm was quickly scheduled in for an inguinal orchiectomy surgery to remove the cancerous testicle and given a course of chemotherapy.

A mere two days later, on Friday the 13th to be precise, a tumour ruptured in his lung causing internal bleeding. “I couldn’t breathe, I was sweating profusely. Within minutes I had 20 doctors and nurses around me. I knew there was something badly wrong,” he said. Colm was rushed to the hospital and prepped for an emergency surgery. The doctors rang his parents and prepared them for the worst. As he was wheeled into the theatre, he was overcome with the stark realisation that he might not make it. “I realised that this was probably going to be the last time I ever saw them, so I said my goodbyes,” he said.

An intensive eight-hour surgery ensued as doctors battled to save Colm’s life. He lost a staggering amount of blood and needed a transfusion. In total, he was given 32 units of life-saving blood, approximately three to four times the amount found in the average adult body. The surgery was a success but Colm wasn’t out of the woods yet. After being administered with an emergency round of chemotherapy, Colm was placed in an intensive care unit.

In the months that followed the surgery, he was given a further five rounds of chemotherapy. He found the whole ordeal “extremely tough” and lost his hair and 40lbs in the process but with the support of his family, friends and classmates, Colm got back on his feet. He finished his last round of chemotherapy in mid-January and has been clear ever since.

According to Galway West Oncology Nurse, Elaine Corcoran, making people aware is really the challenge with testicular cancer. “Most people think of cancer as a disease that primarily affects older people and while that’s typically the case, it’s not true for testicular cancer. The age group most likely to be affected by testicular cancer is actually young men between the ages of 15-34,” she said.

It’s not all bad news, however, as testicular cancer is still a relatively uncommon diagnosis. In Ireland, there were only 117 recorded cases last year, significantly less than say skin or lung cancers. The prognoses for testicular cancer is also quite positive in that it has a 95% cure rate if caught early, another reason why raising awareness is so imperative.

Elaine recommends carrying out regular physical checks after a bath or shower when you’re feeling more relaxed. “Using the thumbs and forefingers gently massage the scrotum to see if everything feels normal. Watch out for hardness or a lump, something that wasn’t there before. Nine times out of 10 it won’t be painful. Sometimes you just feel a change, maybe feel a heaviness or a dull ache, something very simple, it doesn’t have to be anything major,” she said.

If caught early, the majority of testicular cancer cases can be treated by surgery alone through the removal of the affected testicle. Systemic treatments like chemotherapy are only necessary if cancer spreads to other parts of the body as it did in Colm’s case.

By daring to go blue this September, Colm hopes his story will help increase awareness of men’s cancer and help fund cancer diagnoses, treatment and care right across Ireland.

Blue September is coordinated in Ireland by the Men’s Cancer Alliance (MCA) which includes the Mater Hospital Foundation, Mercy Hospital Foundation and Cancer Care West. The aim of the Men’s Cancer Alliance is to create awareness about men’s cancers, treatments and supports available and to raise funds to create and maintain a number of men’s cancer support initiatives.